aadjemian needed a new infographic design and created a contest on 99designs.

A winner was selected from 17 designs submitted by 11 freelance designers. 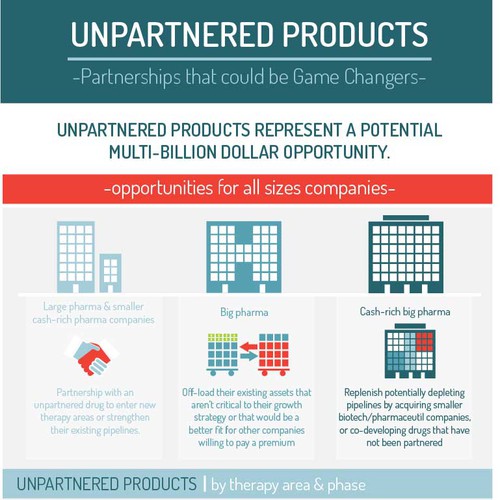 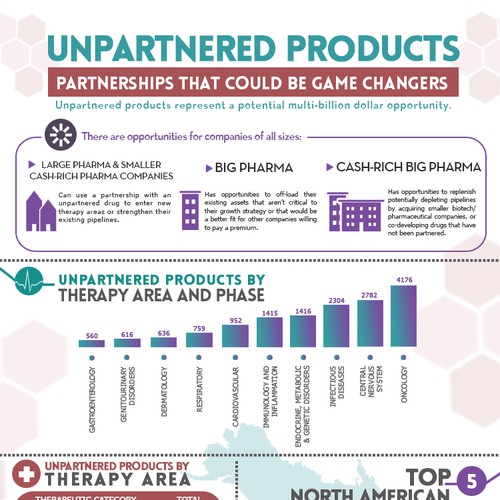 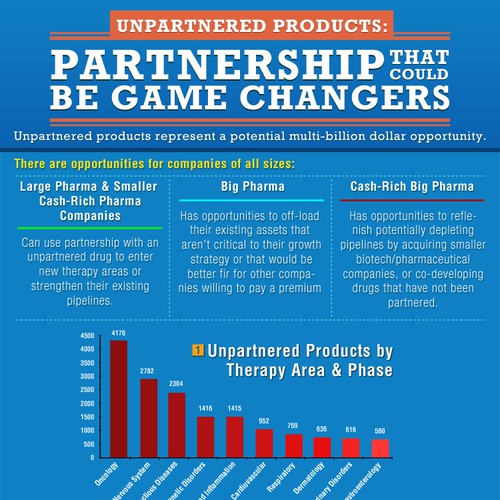 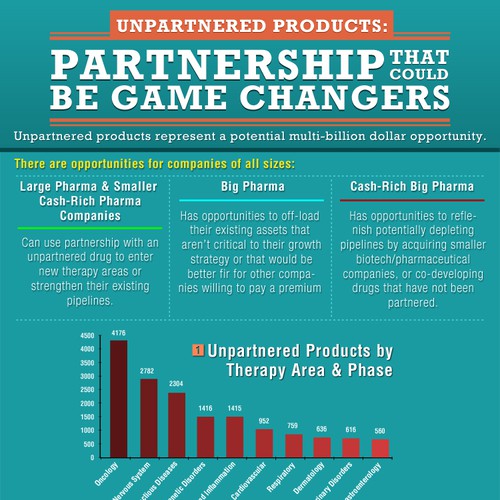 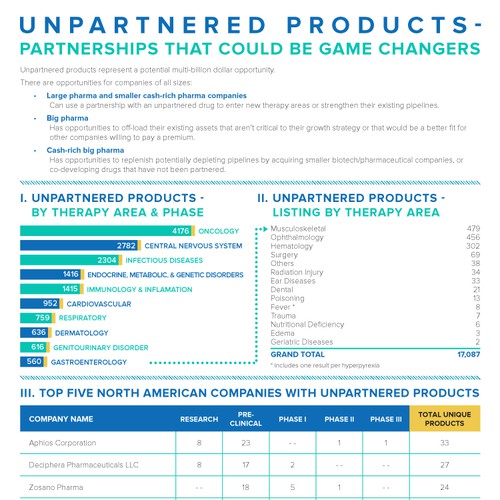 How aadjemian started their infographic journey

The goal of this infographic is to illustrate data from a report we will be putting out soon.

We'd like a designer to use their creativity to come up with an interesting way to display the information and reinterpret the attached charts.

The final graphic should look professional and have a clean/modern/healthcare/tech feel.

Unpartnered Products: Partnerships that could be Game Changers

There are opportunities for companies of all sizes:

• Large pharma & smaller cash-rich pharma companies
Can use a partnership with an unpartnered drug to enter new therapy areas or strengthen their existing pipelines.

• Big pharma
Has opportunities to off-load their existing assets that aren’t critical to their growth strategy or that would be a better fit for other companies willing to pay a premium.

• Cash-rich big pharma
Has opportunities to replenish potentially depleting pipelines by acquiring smaller biotech/pharmaceutical companies, or co-developing drugs that have not been partnered.

9 - ROYALTIES ANALYSIS BY PHASE AND THERAPEUTIC AREA
Candidates further along in development receive higher royalty rates to compensate licencors for the costs and development time already committed and to account for their greater likelihood of approval.
::See Chart::

The final design should be 750 px by 2327 px.  Let me know if you have questions - I'll try to reply as quickly as possible given the short amount of turn around time.

Get started now
Create a professional infographic that explains how recruitment is a sales process
599 US$
Outsourced recruitment - as a strategic and ongoing process. We serve mid-size companies across the US and target the...
21
entries
5
diseñadores
Lead Generate for Us using an amazing Infographic!
GBP 399
We are a Recruitment Company that hunts down people with specific skills and experience for companies with 10+ staff....
4
entries
4
diseñadores
Introduce our Product to the SME market
A$3,299
Our company sells electricity management services: o Real time monitoring of electricity consumption o Renwable e...
55
entries
9
designers
Design our Hiring Workflow Infographic
US$599
We help companies find and hire the best entry-level sales talent...
35
entries
11
designers
Create an eye-catching heatmap to show off our data!
USD 599
IBISWorld is the world’s leading industry market research provider. Our online database of credible and unbiased indu...
33
entries
12
designers
Cybersecurity Infographic
1 599 $US
TAB is a global franchise which helps small to medium sized business owners grow their businesses through assembling bus
7
entries
3
designer graphistes
Learn more about infographic design
See how it works