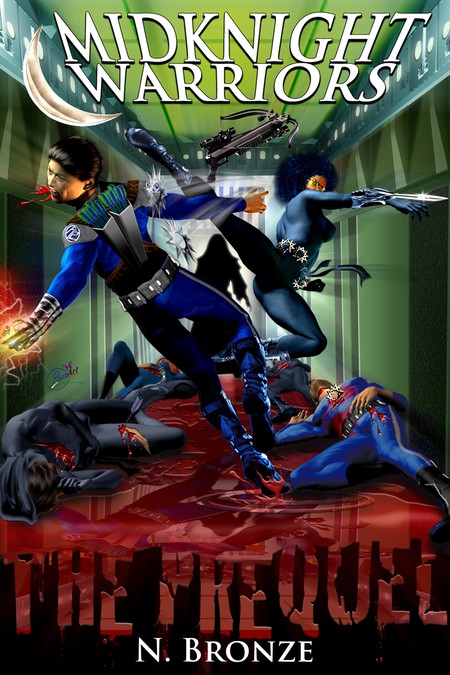 nbronze8 needed a new book or magazine cover design and created a contest on 99designs.

A winner was selected from 49 designs submitted by 16 freelance designers. 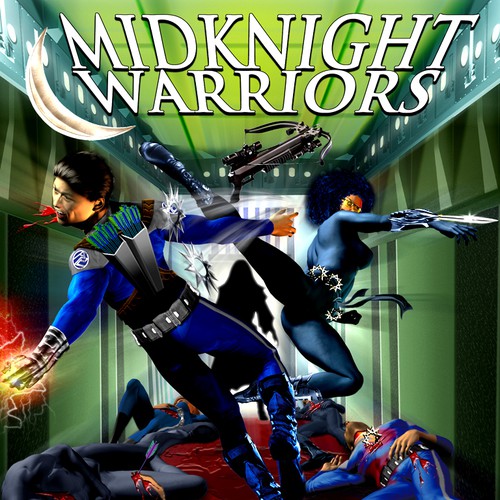 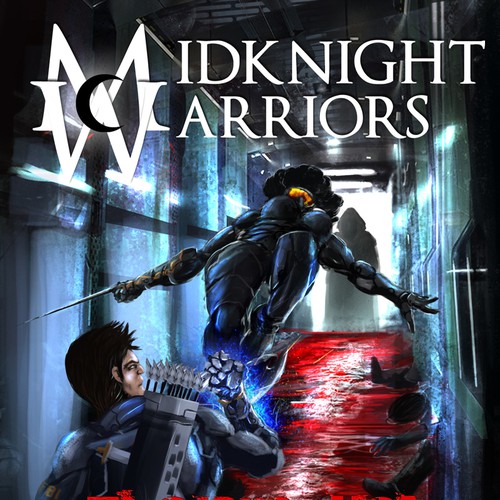 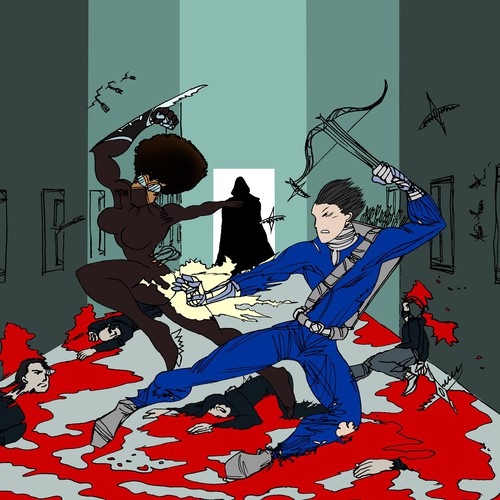 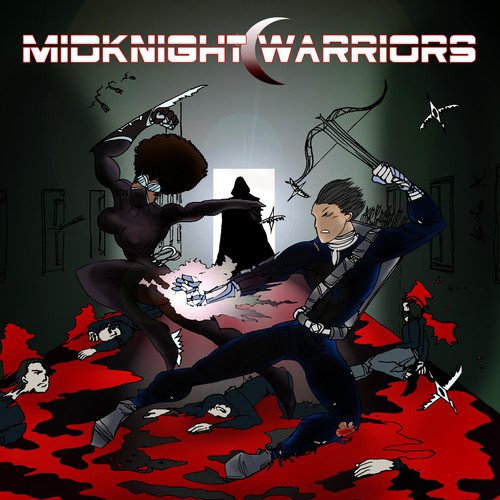 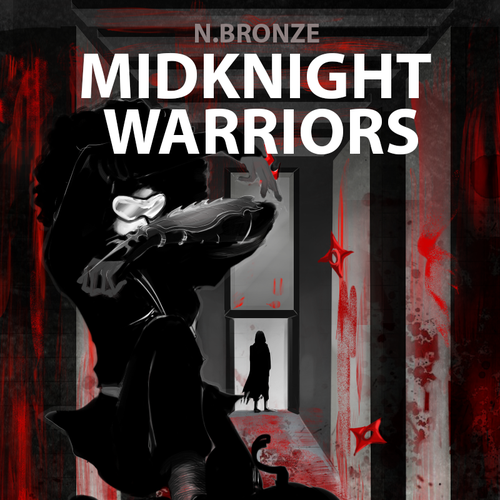 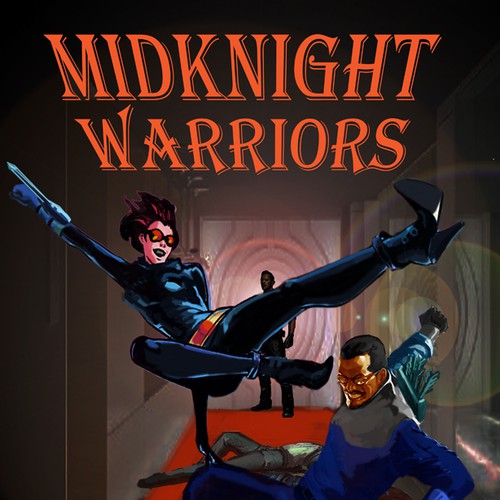 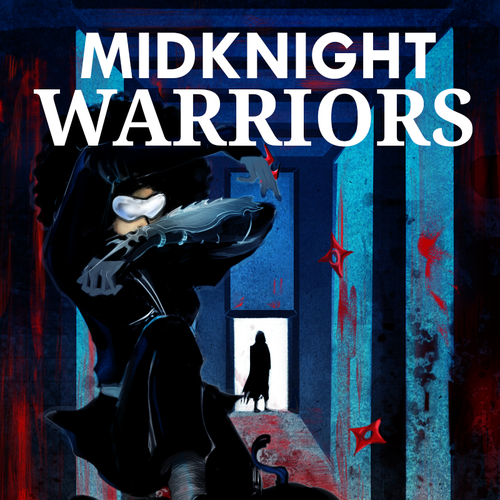 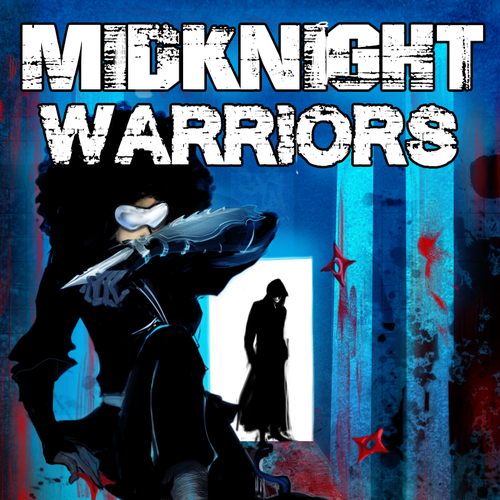 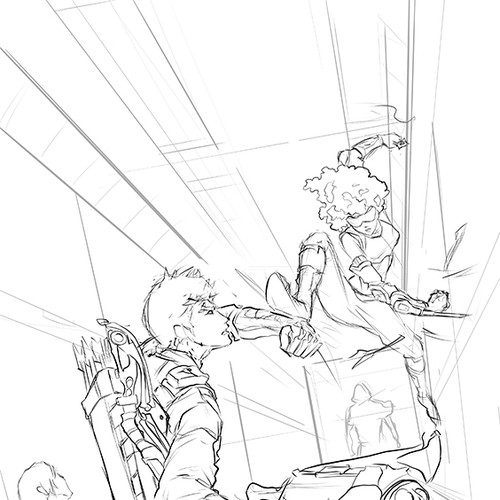 Finalist - El art
This is the 4th cover El Art has done and I have yet to be disappointed. Great to work with, very professional. I look forward to the next project.
- joe.garry

This is a work for hire project. I’m looking for artist that’s into sci fi & comic books and can illustrate action, this is a cover for my first book in the Midknight Warriors series I am also looking for artist for future projects. T-shirts, calenders, posters, art for a visual encyclopedia on the Midknight Warriors universe. I need artist for weapons, technical and robots designs.
As you can see even if you do not get this assignment, I can hire you for some of the others. The first book is a prequel to the series and is for E-book printing only, so I just need the front cover.

About Midknight Warriors: You are about to enter a parallel world, forged without the invention of the gun.
A world where your martial art proficiency and sword is prominent.
A person would have to be stronger and smarter to survive.
A villain would have to be more wicked, vicious and deadly or they would be defeated.
A hero would have to be braver, faster and more skillful or they would be dead.
This is an ultra-modern world where a person is judge by their skills, heart and honor more so than their word.
A world where advance technology is on the rise and ancient magic is almost forgotten.
A world where everyone on the planet isn’t exactly human.
This design is base on the ninjas and superspies role playing book cover.

THE COVER BACKGROUND:A hallway in a ultra modern FBI building, at the end of the hall a open door with a hooded shadow figure.

Excerpt from Midknight Warriors the prequel:[The hall floor is completely covered in blood. Bodies of FBI agents & ninjas are piled up against both sides of the hall. No ninjas were in front of or behind them; they were just surrounded by the dead, as their eyes adjusted Sheryl wished they were in a pitch black hallway again.
Oh my dear God, someone pushed all the FBI and ninjas bodies were against the walls, but there isn’t a spot on the floor that do not have blood or someone’s guts spattered on it. What in the hell am I going to do? Every face that I can see… I recognize. Sheryl closed her eyes tight and turned away.]
On the cover the blood on the floor don't reach the end of the page but start to rain/drip down to form the words THE PREQUEL.

In the forefront I have two combatants in the middle of the hallway, a FBI agent and a ninja. The ninja is female with a Afro.

Excerpt: [At the last room in the back of the house, Adel and Sheryl kicked open at door to a guest suite, a surprised shapely female with an afro dressed in black stood by a ransack dresser.
“FBI, don’t move!” Sheryl declared, has she and Captain Oliver pointed their crossbows at her. The ninja stood motionless, Sheryl Cautiously walked over to arrest the thief. Although the person in front of her didn’t even breath, Adel knew that they were facing a warrior. “Be careful.” Oliver quietly warned Sheryl.]

The ninja may have on a pair of Nu-Shades (Think tinted ski goggles without the strap)
The FBI agent is Asian male & wearing the new FBI uniform, the grey trim with a Battle Belt.(utility belt)

Excerpt:[All was silent, and Arthur turned to his right. “Come in rookie.”
The whispers in the audience grew as Mera stepped on the stage gripping her sword and wearing a dark-blue one piece zip-up jumpsuit; it had a wide grey shoulder boarder, going all around with an open v-collar and matching grey mock neck shirt underneath it.
Looks nice. Sheryl smiled. I wonder how it feels.
Arthur nodded as the rookie agent passed him. “The material is thicker than soft-cloth, but very flexible; you can stand right there Mera thank you.”
Mera listened then she slowly turned so everyone can see the grey stripe going down the pants legs into her dark-blue Action Boots.
Karim’s eyes twinkle. Mera has a nice butt on her.
Arthur turned and faced his audience. “The grey trim uniform is for everyone at any time in or out of the office; next we have Special Agent Bruce.”
The agent walked on the platform with his suit, the same style as Mera but his was trimmed in black with matching black gloves and Battle Belt.
Arthur smiled at the two agents standing together. “The black trim is for outside at night, steak-outs or investigations and combat not for questioning witnesses, and if you’re just in the office for the day, you can wear this. Step on out Agent Cecil.” ]

Weapons:The FBI agent has a backpack quiver & collapsible bow, (Green Arrow style) on his back. A Power Glove with energy surrounding his fist, he also have a crossbow that he shot at the ninja. The ninja is in the air coming down, one foot is kicking/pushing the power glove arm & her other foot has a Boot Blade. (Think ice skates, but the blade do not go pass the heel or toe.)
She has a Vambrace Blade on one of her arms, which blocked the FBI’s bolt that was headed for her face.

Excerpt1:[a large fourteen inch blade slowly emerged from the top of De Liseo’s forearm armor. “Come on, mother fucker I’ll cut your dick off.” The First Lieutenant declared.]
Excerpt2:[“I do have a Vambrace Blade.” “A what?” Destiny’s eyebrows arched. Viola smirked bluntly. “It’s armor that fits on your forearm with a large retractable fourteen inch blade in it.” “Oh, I’m not planning on getting that close to it; if I did, I would use my Sais.” “I’ll take that.” Bill smiled as he dreamed of cutting off that thing’s head.]

The ninja is throwing Shurikens at the agent and he’s trying to avoid the stars. (Do the shurikens have a energy signature? Mmm)

Colors:The open door at top of the cover is white the figure inside is all black. The walls in the hall is I don’t know. At first I was thinking light grey but don’t know it would go well with the FBI’s uniform. The words MIDKNIGHT WARRIORS is white and ether over the door or the side of it. My DBA N.BRONZE is black and under the words THE PREQUEL which is a bloody red.

The Fonts: THE PREQUEL is horror-like, chiller style. N.BRONZE I do not know, but I think I want it &THE PREQUEL to lean back into the book (Star Wars style). The title MIDKNIGHT WARRIORS I don’t know the font. But I think I want it bold, to blend in with the open white door. (I don’t want the door to be so Obvious, it’s something that the reader would see at second glace.)

I want a grey crescent moon with the MIDKNIGHT WARRIORS title.

I need all rights & control over the design and I will give you design credit. Must be familiar and use Kindle specs. Graphics must be RGB.
Only original designs will be accepted, I will not accept any work that's trademarked, copyrighted, etc. Any plagiarized or copied illustrations will be immediately disqualified!
I do not own any of the attached pics. they are provided as a reference/example only! Please do not copy them in your design.Documented assurances of original work is expected from finalists. I need my cover to accomplish three main things.
1. Must peek interest and curiosity.
2. Advertise the book.
3. Show insight on what they will find inside the book & set the story mood. (ACTION)
For any more specifics or questions please don't hesitate to contact me.
Have fun, be creative.
Thank you all
N. Bronze
The cover must look good as a thumbnail

You can Email me.

Get started now
Eye-catching and original cover for Thriller book. (Looking for a long term designer)
2.999 NOK
We sell Thriller books (ebook and printed)...
92
entries
20
designer
Create a Book Cover for Young Adult Science Fiction Novel
299 $US
I need a cover for Evolve, a young adult science fiction novel.
43
entries
12
designer graphistes
Create a feel good book cover for a summer crime comedy at a lake
€ 500
I am a German writer. This will be my first self-published book. I'd like the readers to feel good and happy.
97
entries
28
designers
Create a sleek, exciting cover for the spy novel Tokyo Black
299 US$
I write fast paced spy novels that focus on adventure, troubled characters, and exotic locations....
54
entries
14
designers
Dynamic novel cover design with a focus on action & adventure in a Premium style.
GBP 789
First time author of young adult action/adventure fiction. Teenagers are the target audience....
37
entries
8
designers
Near death experience book cover
USD 499
We publish books for the Swedish market....
148
entries
29
designers
Learn more about book or magazine cover design
See how it works