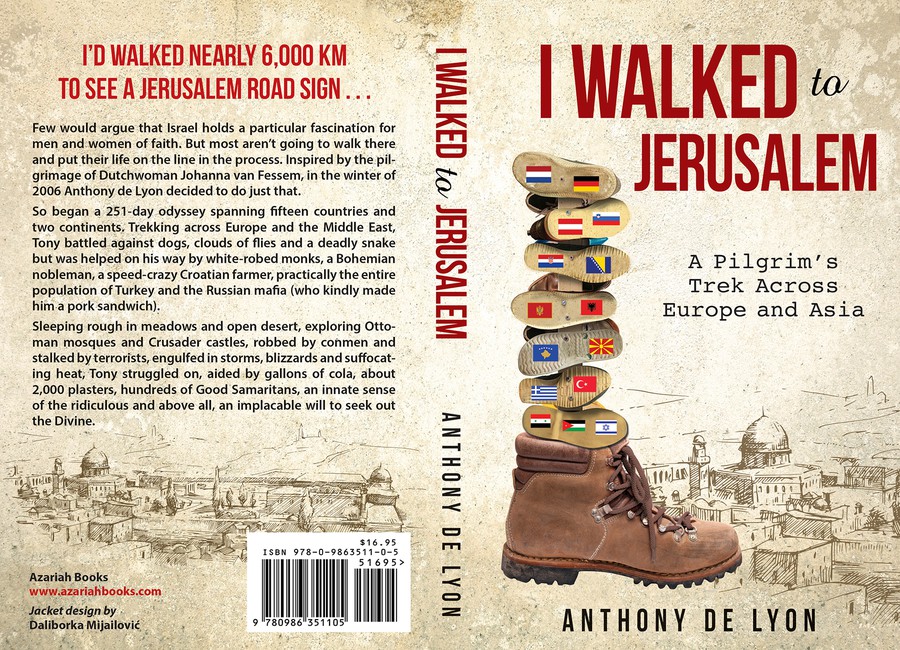 Design a stunning cover for my book which describes how I walked 6,000 km through 15 countries.

Azariah Books needed a new book or magazine cover design and created a contest on 99designs.

A winner was selected from 48 designs submitted by 9 freelance designers. 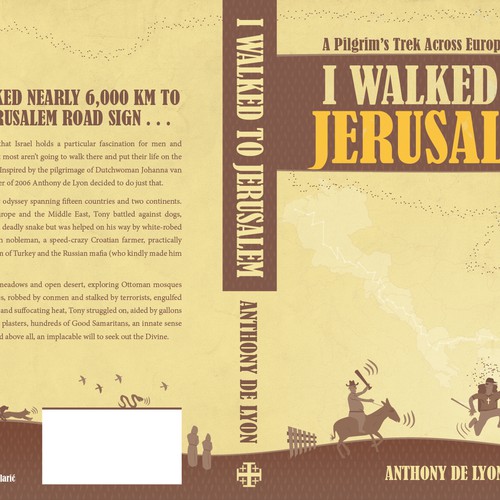 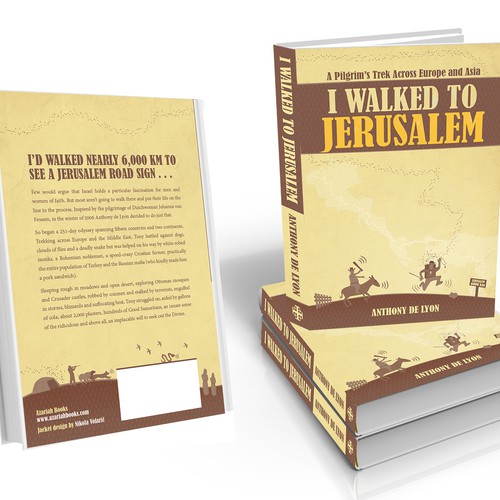 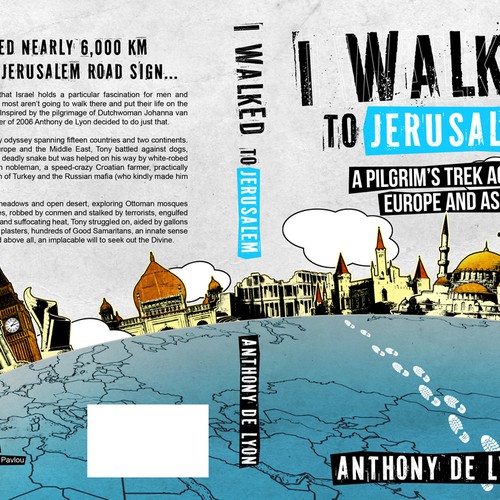 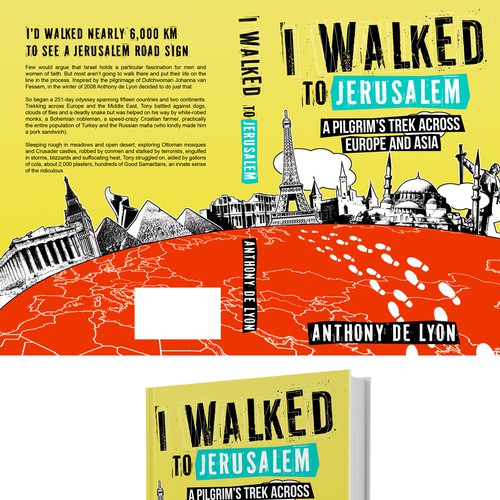 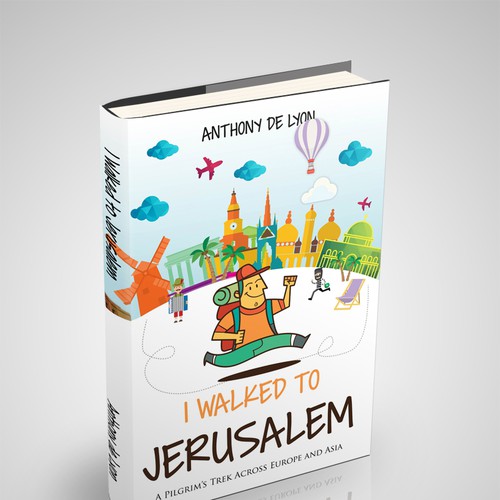 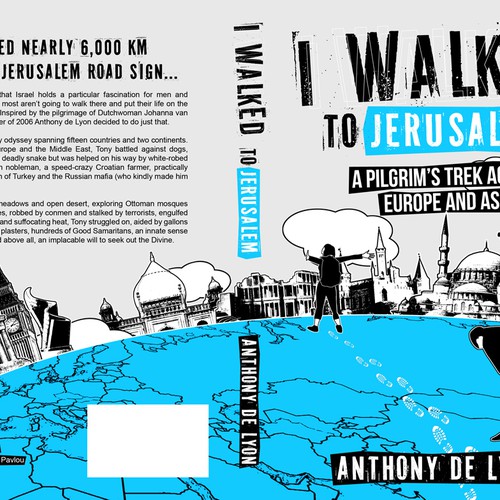 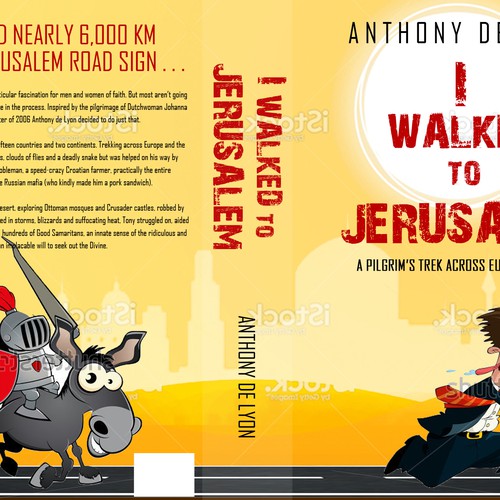 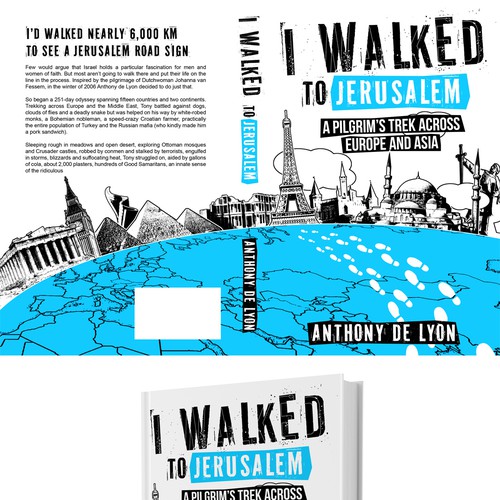 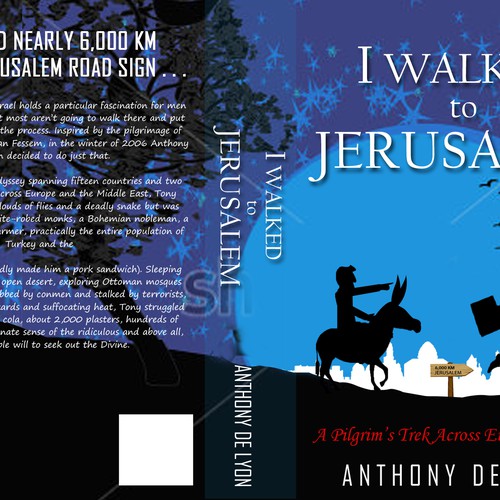 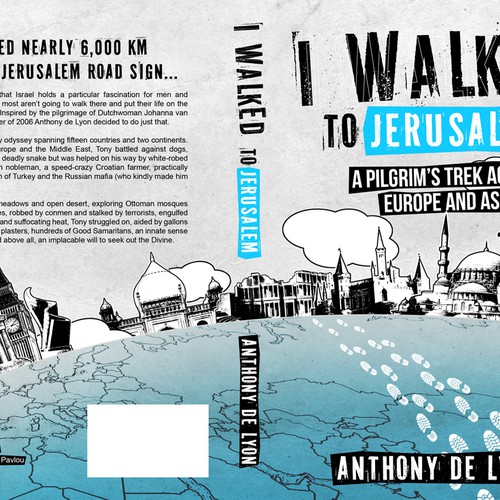 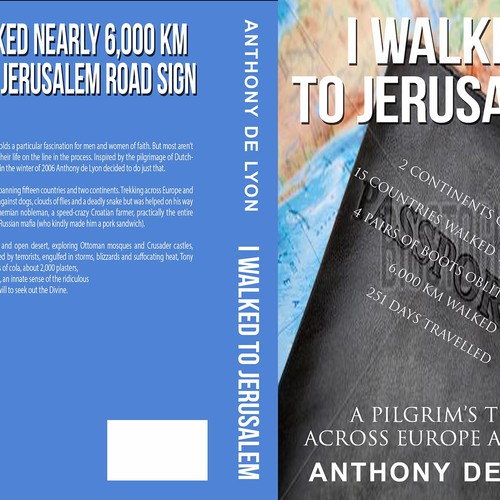 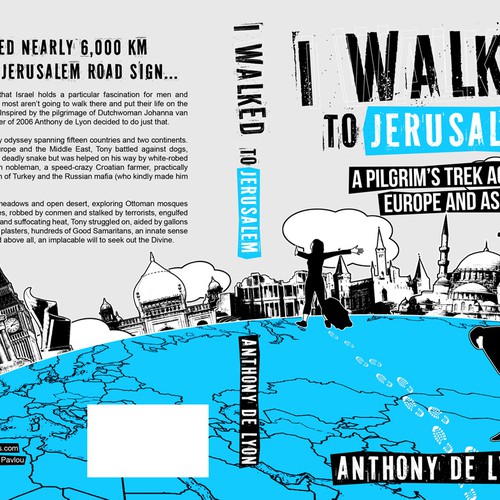 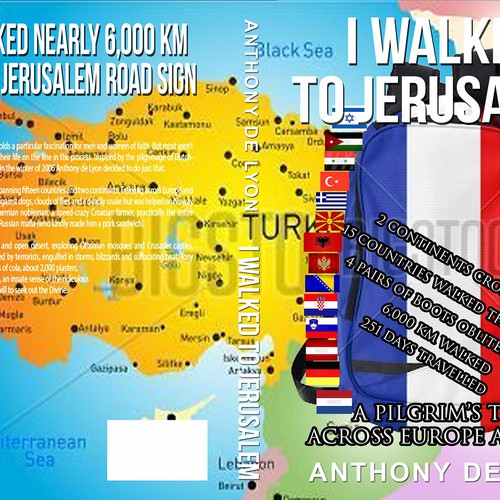 We specialise in the publication of travel, religious travel and adventure travel novels.

Project Introduction
It’s not everyday you announce a 6,000 km walk to the Holy Land. It’s rarer still you buy a rucksack and begin. In the winter of 2006, Anthony de Lyon did just that. Setting out with a skyscraper rucksack and a tent best described as ‘snug’, he made his way through Europe, Asia and the Middle East, navigating fifteen countries and the highs and lows of modern travel. Drawing on his travel diaries, ‘I walked to Jerusalem’ documents the sights he saw, the people he met, and the lessons he learned on that incredible journey.

The book is aimed at:
1. A Christian audience, for example those contemplating walking to the famous pilgrimage cathedral at Santiago de Compostela.
2. Anyone who likes humorous travel novels.

‘I walked to Jerusalem’ will be published by Azariah Books.

Front Cover Concept
I’ve posted the back of the jacket and a few other images on the publication design board at: https://uk.pinterest.com/azariahboo…jerusalem/

I don’t have a really strong design concept in mind, though something featuring a guy chased by a man riding a donkey might prove amusing (as this happened to me in Turkey), or some idea featuring camels, which could be fun.

As the book is written in a light-hearted style (think Bill Bryson), I am looking for a light, fun, quirky and zany cover. I don’t think dark colours or sombre themes will work here. And I do not favour landscapes (no matter how stunning) populated by solo walkers with rucksacks and / or trailing footprints ...

Random facts which could be worked into the design
• 2 continents crossed
• 15 countries walked through
• 4 pairs of boots obliterated
• 6,000 km walked
• 251 days travelled

Front Cover Text
Must include (without the bracketed material):

Back Jacket Text
The back text is included below. The font is open sans, which I’ve used in the book’s interior. However, I welcome other font suggestions. The dots that form the ellipsis should each be separated by a single space.

Few would argue that Israel holds a particular fascination for men and women of faith. But most aren’t going to walk there and put their life on the line in the process. Inspired by the pilgrimage of Dutchwoman Johanna van Fessem, in the winter of 2006 Anthony de Lyon decided to do just that.

So began a 251-day odyssey spanning fifteen countries and two continents. Trekking across Europe and the Middle East, Tony battled against dogs, clouds of flies and a deadly snake but was helped on his way by white-robed monks, a Bohemian nobleman, a speed-crazy Croatian farmer, practically the entire population of Turkey and the Russian mafia (who kindly made him a pork sandwich).

Sleeping rough in meadows and open desert, exploring Ottoman mosques and Crusader castles, robbed by conmen and stalked by terrorists, engulfed in storms, blizzards and suffocating heat, Tony struggled on, aided by gallons of cola, about 2,000 plasters,
hundreds of Good Samaritans, an innate sense of the ridiculous
and above all, an implacable will to seek out the Divine.

Designer Credits
I would like to credit you as jacket designer both in the book’s interior and also on the back jacket (with your permission).

There’s a reason why there are very few books on Amazon about walking to Jerusalem - it’s a very long way and the Middle East is somewhat dangerous ... This is your opportunity to contribute to a unique product and be part of a small bit of publishing history. I want a fun, light and quirky cover that grabs the reader’s attention and demands they go to chapter one and start reading!

Get started now
Adult Coloring Book Cover
USD 299
Product: Swear word coloring books for adults. Audience: Women, age 25-45, who wants to reduce stress and relax whil...
25
entries
13
diseñadores
Design book cover for "The War-Bringer" by an Indie Author .
499 US$
I'm an independent author looking for a design for a book cover....
74
entries
11
designers
"The Critic," a literary thriller needs a killer book cover!
US$299
Hello Designers! I am looking for a book cover. It falls under the literary genre, but with a thriller element. M...
73
entries
22
diseñadores
Urban fantasy author needs exciting book cover design.
US$299
Urban fantasy author who writes about vampires, witches, werewolves and other supernatural beings for entertainment....
55
entries
8
diseñadores
Book Cover Design For First Book In Series - Fun Chick Lit/Romance
US$299
Galahads Press is a self-publishing company. We are focused on writing fiction in the chick lit genre with a focus o...
50
entries
13
designers
Eye-Catching Vampire Novel Cover
€279
The book is a Vampire Novel. The aiminggroup should be mainly females between 25-45....
169
entries
31
designers
Learn more about book or magazine cover design
See how it works