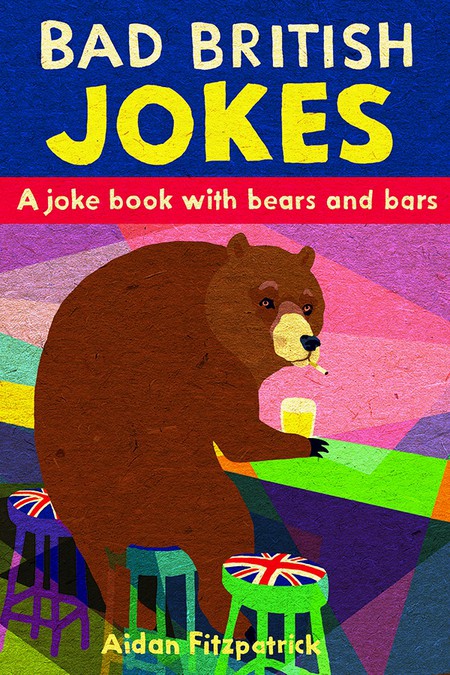 "Bad British Jokes", a cover for a dry joke book with bears and bars

afit needed a new book or magazine cover design and created a contest on 99designs.

A winner was selected from 97 designs submitted by 27 freelance designers. 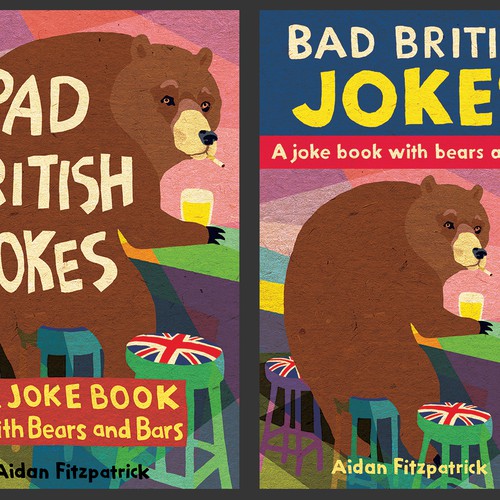 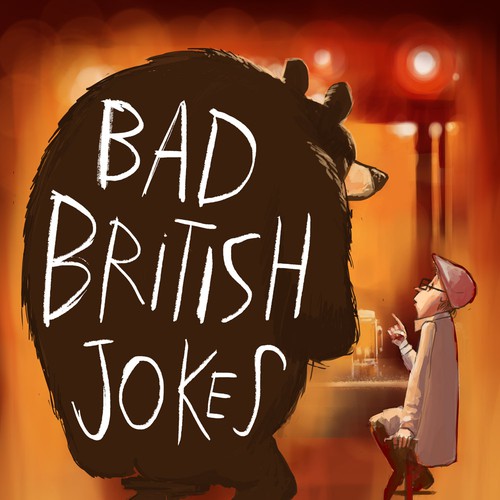 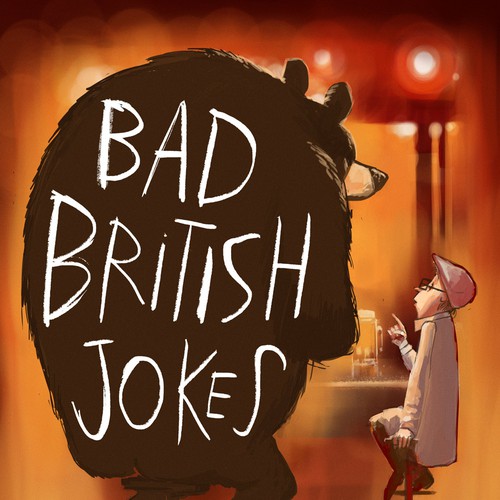 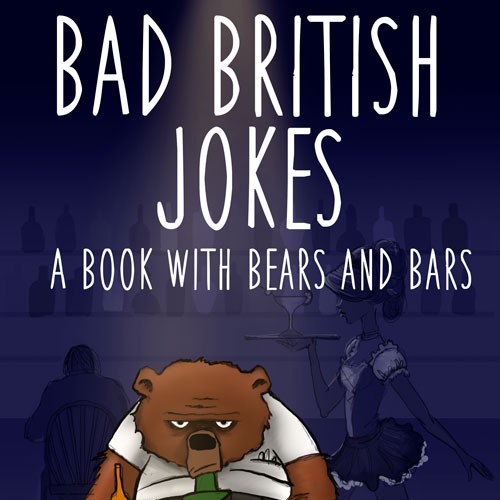 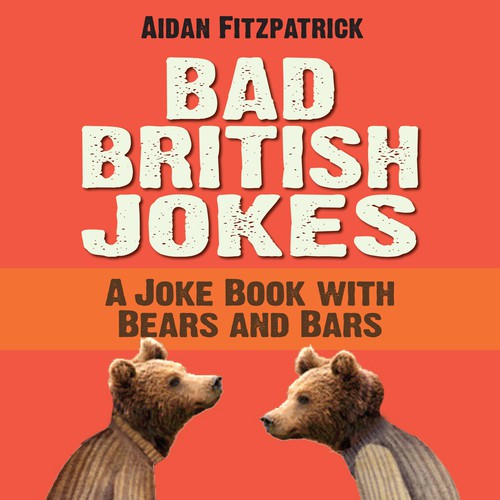 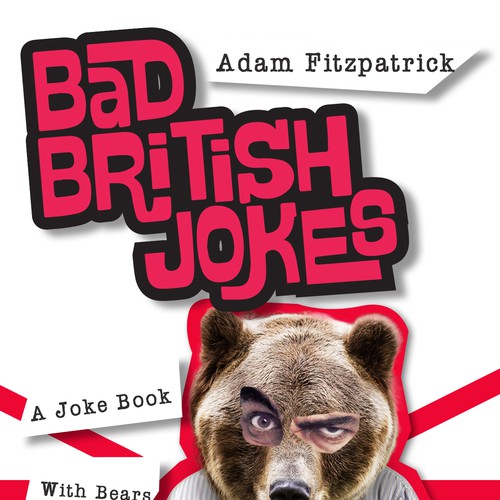 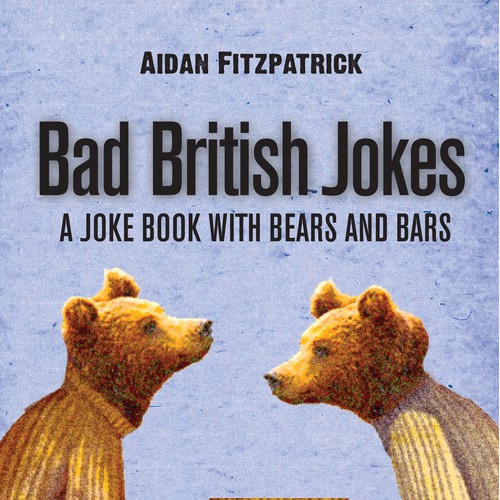 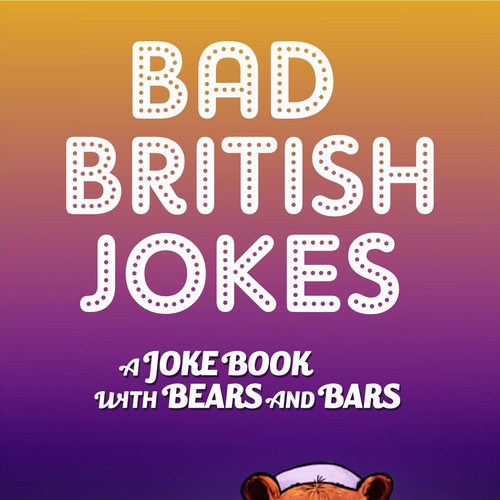 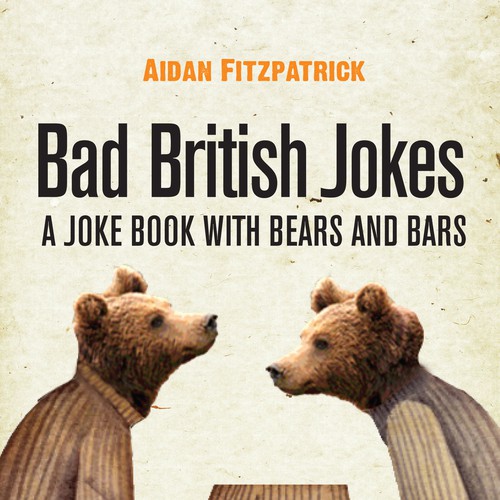 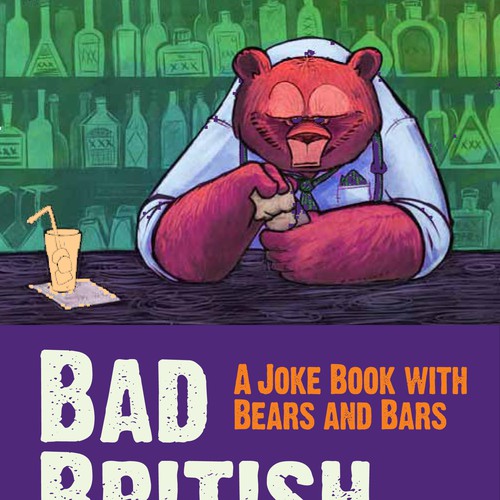 Finalist - ilustreishon
The illustration is gorgeous! Thank you for your excellent service! Helena
- sci.comm

Bad British Jokes -- a joke book with bears and bars

Bad British Jokes is a hilarious joke book with 21 illustrations and dry jokes of all types.

“What do you get if you have an overweight Irish traveller take care of your garden? A big fat gypsy weeding.”

The book has tall tales, wordplay, jokes about hipster, doctors, pirates, animals and even cheese.

“An Irishman walks into a bar with a parrot on his head. The bartender says “Hey, where’d you get that?” The parrot replies “Ireland, there's thousands of ‘em.””

“They recently found a mummy in Egypt, covered in chocolate and nuts. Apparently it’s Pharaoh Rocher.”

“My old man was one never to go down without a fight. That’s why I’ll never get in a lift with him again.”

I'd like a new cover for my "Bad British Jokes" book. The cover that I have now (attached) is too heavy. It's not appealing and the typography and colours don't work well.

Given the subtitle refers to both bears and bars, perhaps they might continue to feature on the cover, perhaps in the same way. Or perhaps not. Similar books have pictures of people laughing and flags, but I'd like to avoid both. Show don't tell. It shouldn't look cheap. And given it's a book of bad jokes, I dare say that if you include a bear it'd be more likely to look dour than amused by these.

The cover should include the title, prominently: "Bad British Jokes".

It should also include the subtitle "A joke book with bears and bars", and the editor's name, "Aidan Fitzpatrick".

Here are three bad jokes from the book which include bears:

>>
A bear walks into a bar and orders a beer. “Six quid”, says the bartender.
The bear drinks up and pulls out the money to pay.
As the bear is getting ready to leave, the bartender says “We don't get many bears around here.”
The bear says “At these prices, I'm not surprised.”   

A bear walks into bar and says “I’ll have a beer and a packet of… crisps.”
The bartender says “Why the big pause?”
“Oh these, I was born with ‘em.”   

A man walks into a bar and sees a bear tending it, wearing an apron and polishing glasses. He stares at the bear until it returns the stare, saying “What’s the big deal? You’ve never seen a bear tending a bar before?”
“No,” the man says, “I just can’t believe the horse sold the place.”

Also, here's a bad joke. If you're going to draw a bear, what sort of face would it make on being told a joke this bad?

An Irishman walks into a bar with a parrot on his head. The bartender says “Hey, where’d you get that?”
The parrot replies “Ireland, there's thousands of ‘em.”

Finally, when I was working on the original cover, I found these images of bears and or bears in bars. I don't have rights on any apart from the one I used, so you can't use these either. However, the different arrangements might give you some ideas: https://www.dropbox.com/sh/gh6itg9x…Vd5wa?dl=0

Get started now
Design a New Book Cover and Interior Design for a Native American Title from Council Oak Books
$799
Independent Trade Book publisher.
128
entries
50
designers
Design an irresistible, powerful, book cover for a political thriller set in Paris
499 US$
Self Publishing THE PARIS PLOT, a novel (www.theparisplot.com) through Oakhurst Print, my company. Publisher of ficti...
147
entries
34
designers
Design a scifi novel cover with elements of Arthurian legend
799 US$
The novel (and subsequent trilogy) is science fiction set in the modern day with elements of the thriller genre and myth
142
entries
31
designers
In the Twisted Web
$694
I am an author of commercial fiction, most notably romantic thrillers with a strong female lead....
168
entries
50
designers
WANTED: Kick-Ass Dystopian Book Cover
$ 299
I write dystopian and post-apocalyptic novels for new adults....
100
entries
21
Designer
Book cover needed for humorous pregnancy book.
A$399
My mother (Vicki Bryce) and I have written a book. Title: Hatch and Dispatch Subtitle: Tales and advice from a mid...
113
entries
31
designers
Learn more about book or magazine cover design
See how it works